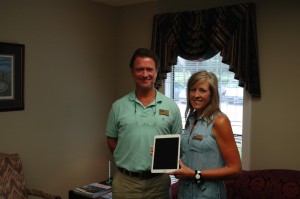 Here at Coldwell Banker Spinks Brown Durand we like a little friendly competition so from May 1st through July 31st we had ourselves a listing contest. When the grand prize is a brand new iPad Air it should have been no surprise that everyone was in the race! Not only were our listing numbers through the roof but in the end nearly 30% of the listings taken during the contest period have either already sold or are currently under contract. It was a close contest and the lead agent changed many times but, in the home stretch one agent surpassed the rest so we would like to give big congratulations to Alisa Matheny who was the winner of the new iPad Air with a total of 17 listings at contest end!

Our runners up were not far behind, James Potts had 13 listings and Debbie Pitts finished with 12 listings; way to go guys!